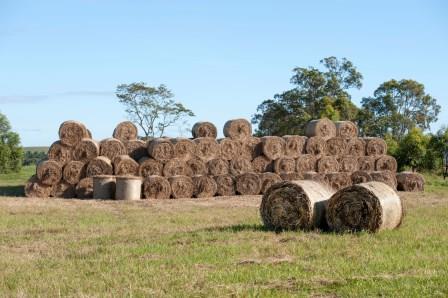 The Casino Food Co-op is co-ordinating a massive emergency fodder drive across the North Coast.

With flood waters still receding, Australia’s largest farmer owned Co-operative is taking vital steps to ensure that what is left of the region’s cattle, will survive.

Thousands of cattle have been lost in the past week, due to history breaking record high flood waters that swept across the whole North Coast.

But many have survived.

The race is now on to save those that survived the actual flood.

The Co-op’s Livestock Manager Heidi Hayes says time is critical and the Co-op is doing everything they can to support the local community.

“These cattle have been in water for days. They’re cold, they’re picking up pneumonia and all sorts of illnesses. It’s quite desperate,” she said.

Mrs Hayes said cattle are dying from eating contaminated pasture, so fresh fodder will save their lives.

“The mud carries all sorts of bacteria. When the cattle consume that mud, they then get what’s called black scours and animals will simply die from it. It builds a bug in their bellies and it can happen really quickly…within hours.”

Heidi Hayes is co-ordinating The Casino Food Co-op’s fodder program, after an overwhelming number of people wanting to donate hay.

But there was no way for those individuals to find out who needed the feed the most, or a place to put it.

The Casino Food Co-op thought it was a way to help their members and the community.

“When there was a need for someone to accept that donated hay and fodder, because everyone wants to help, we decided we would take it on. We had the capacity, the room and the people to disperse it.”

“There were trucks turning up in Casino from all over with really nowhere to go. The water was and still is up in some parts and we started taking the trucks in and dispersing of it as the water subsides,” she said.

Mrs Hayes says anyone is able to access donated hay through the Co-op.

“It’s currently first in best dressed. As our producers or farmers along the North Coast ring up, we simply put them on the list and help them out as quick as we can,” she said.

“We understand that it’s an emergency situation and most people need fodder now as the water recedes. We have trucks on the road 24/7 while ever it’s safe for people to drop hay off,” she says.

It’s not just cattle feed that is in desperate supply.

People are now donating feed suitable for horses to the Casino Food Co-op.

“Fortunately one of our guys came to the rescue from Queensland last night with small square bails. Because until then we only really has silage that was fit for cattle more so than horses. Now we can supply those as well.”

The Casino Food Co-op says they will continue to co-ordinate the community fodder drive, for as long as it takes for producers to restore healthy pastures.

“This is not going to end in the next week or two. Long after the water recedes and people are trying to get back to normal, we are still going to have people feeding cattle.”

“We have dairy farmers who are trying to feed 400 to 500 cattle on nothing more than mud at the moment. So that’s going to take us into winter, where they will try and get some oats or ryegrass in and then tart to feed that out the other end.”

Mrs Hayes says if anyone wants to donate fodder, they should contact the Casino Food Co-op or call her on 0429 640 047.

And if farmers need feed, the Co-op can organise delivery of hay, or it can be picked up from Casino.

“Please don’t sit back and think you’re not worthy of help. Everybody is in the same situation here and we just want to get the hay to people who need it.”